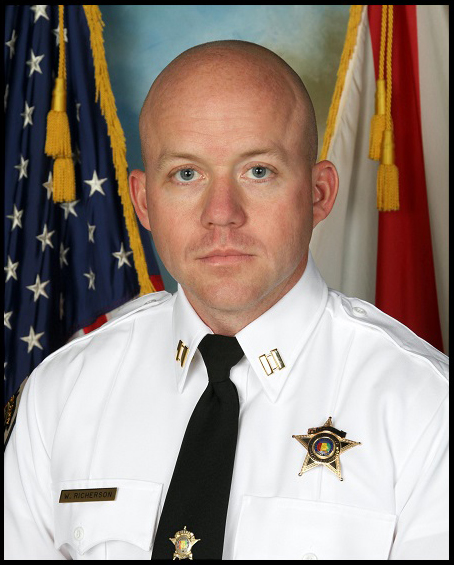 Captain Wesley Richerson started his career with the Montgomery County Sheriff’s Office in 2006.  During his law enforcement career, he served in the Patrol Division, K9 Unit, Special Operations Bureau, Narcotics, Criminal Investigations Division, and as an Investigator on the FBI Violent Gang Task Force.  Captain Richerson is an experienced counterterrorism and tactical instructor and he holds several instructor certifications from the Department of Homeland Security, the Federal Bureau of Investigation, and the Alabama Peace Officers’ Standards and Training Commission.

As the Commander of the Administrative Division, Captain Richerson is responsible for overseeing the daily operations and budgetary needs of the Sheriff’s Office.  In addition to daily operations, he is the Tactical Commander of the Montgomery County Sheriff’s Office SWAT Team and is tasked with directing the team during high risk incidents.  He supervises law enforcement and civilian personnel who staff multiple units within the division.

Captain Richerson earned a bachelor’s degree in Criminal Justice and a master’s degree in Justice Administration from Faulkner University.  He is a graduate of the Federal Bureau of Investigation (FBI) National Academy Class 271.  Captain Richerson serves as a Commissioner on the Pre-Trial Citizens Advisory Commission on Prosecution for the 15th Judicial Circuit of Alabama.  In addition to his Sheriff’s Office duties, Captain Richerson is actively involved in higher education in the criminal justice field of study.