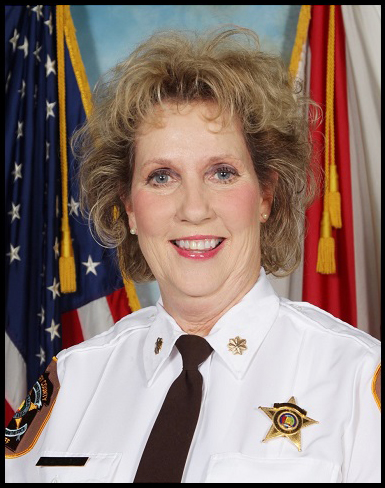 Major Gayle Atchison began her career with the Montgomery County Sheriff’s Office as a Deputy Sheriff in 1976.  She holds a Bachelor’s degree in Criminal Justice from Auburn University.  Major Atchison has advanced through the ranks serving in a variety of operational and administrative capacities.  In 1998 she was promoted to the rank of Captain and assumed command of the Legal Services Division where she continues to serve today.  Currently, the Legal Services Division is staffed by 29 full time Deputy Sheriffs, 20 part-time Deputy Sheriffs, and 17 civilian employees.

As the Commander of the Legal Services Division, Major Atchison is in charge of  legal process service, pistol permits, court security, fingerprint/identification, warrants,  elections, and service of involuntary commitments through Probate Court. She oversees the day-to-day operation of the division and is the liaison for the Sheriff’s Command Staff.

Major Atchison was promoted to the rank of Major on January 1, 2018.  She is a member of the Sheriff’s Command Staff.

Free viewers are required for some of the attached documents.
They can be downloaded by clicking on the icons below.